Iâ€™ll post up an initial run report, because Danny wonâ€™t be able to for a little bit. He is on the road with his motor home living the dream of parking it in every Wal-Mart parking lot in America.

I met up with Danny and Tina in Ellensburg and we proceeded to Liberty. After securing space for our group at the campground and setting up our homesteads we decided to go run a loop while waiting for the rest. We ran Pit Overlook Trail (4W321) and Crystal Ridge Trail (4W319). Pit Overlook was scenic and we saw a turkey hen with chicks. It was a relatively easy trail with maybe one interesting climb made more interesting by Danny showing the propensity that he would have all weekend for trying to do climbs in 2-lo. At one point we almost revoked his 2-lo privileges. Crystal Ridge was more fun, but would have even been more fun run up instead of down (or in the wet.) Danny did get stuck in one little mud hole there and had to pull cable, but that was a freak accident. There were tractor tracks laid down to prevent erosion and give some traction, but one hung up on Dannyâ€™s spring perch. That was also the only place where we saw a large quantity of mosquitoes. It took driving down the trail a bit before they were out of our Jeeps. Sorry no pics of that, batteries were dead in the camera.
Back from our afternoon loop...

Returning to camp we noticed that Ed was already there (much to our surprise, we thought he would be rolling in late.) We went over and made initial plans with him for the fourth. About that time Tim showed up with his behemoth trailer, condo, flatbed, apartment complex with TJDave in tow. They were slowed a bit by one flat tire on Lurchâ€™s the tow haulerâ€™s maiden voyage.
Saturday morning we rolled out of camp at about 10:00 AM with Ed as our trail guide. (Hence breaking the rule that my wife gave on leaving the house, â€œDonâ€™t follow Ed.â€
Last edited by iaccocca on Tue Jul 07, 2009 9:36 am, edited 2 times in total.
Okay, we're a little crazy to have a Duramax for a daily driver. But if we go off our meds, we might wind up in a Prius.
If you want to hear God laugh, tell Him your plans.
N7EEL WROD249

"i dont need no stinking spare"

Mostly poser shots for me. I was worried about my Jeep not making it up stuff, but it suprised me in a couple of spots. My daughter took this pic of Lee's Rubi from the back seat while we were in motion.

This sign I ignored is the sign that told me the trail switched back and continued. I chose the sign that said "Trail ends in one mile, turn back"

No pics of that sign, but my family will never let me forget what it said.

A couple of Lee and Tim coming out of the trail that spit us out on a fireroad.

View from the top.

This is the point we headed down to catch some of the Liberty old town festivities. We missed the parade, but talked to an old guy that was very excited about their little party. He was really whoopin' it up!

We went back to camp for lunch and Savannah's first driving lesson.

Sunday morning man quiche discussion and view of our campsite.

Passing Lee coming down as we were running up to the Hole in the Rock.

It was a great trip, great food, weather, company, and a nice campsite Danny and Lee picked out that fit all our junk. Thank-you guys for saving a spot and to Ed for finding me when I went missing.

good trip report. i was kinda hoping for some color in the campfire, you know purples, pinks, greens and what not. one of these days i'll be back

scumby wrote:good trip report. i was kinda hoping for some color in the campfire, you know purples, pinks, greens and what not. one of these days i'll be back

We did discuss the chained up motor mount mod while out on the trail.
Okay, we're a little crazy to have a Duramax for a daily driver. But if we go off our meds, we might wind up in a Prius.
If you want to hear God laugh, tell Him your plans.
N7EEL WROD249

Right on! Thanks for sharing.

I will have to get up that way someday.
Top

Great Pics guys, Wish I could have been there.
Top

Best I can tell on Sunday we were running Lion gulch Trail (4W332) and Billy Goat Gulch Trail (4W339) with a few fun detour loops thrown in.
Okay, we're a little crazy to have a Duramax for a daily driver. But if we go off our meds, we might wind up in a Prius.
If you want to hear God laugh, tell Him your plans.
N7EEL WROD249

Not alot of skeeters this time, but there were plenty of these critters.

They looked even funkier when they flew. Anybody know what they are? Maybe I need to learn to tie a new fly pattern.
Okay, we're a little crazy to have a Duramax for a daily driver. But if we go off our meds, we might wind up in a Prius.
If you want to hear God laugh, tell Him your plans.
N7EEL WROD249

That is a "false brister beetle".
I don't Text (at least not very well), I eat Blackberrys, and I only Twitter after sex...
Top

They looked real to me!

I am insanely jealous.

So I'm back from my little adventure. After Liberty we spent 3 days camping with friends, playing golf, well trying to, eating and drinking just North of Cle Elum. Then we headed for Sisters Or for the annual outdoor quilt show. We got home yesterday.

I'd like to thank Lee for posting a very nice and accurate account of this run. I'd also like to thank those that showed up, especially Ed. We would have had a great time without him but his knowledge of the trails made one of the best runs I've ever been on. "NOTE" Whoever said don't follow Ed is badly mistaken. I followed him all day Sunday and we had the best run of the weekend, even in 3 wheel drive.

There are not too many action pics this trip because everyone was set up to wheel and wheel we did. The only cable pull was mine on Friday. It was a serious wheeling weekend.

After Lee left us we tried to find the tight trail we did 2 years ago but couldn't. We ended up back down at Hole in the Rock where we saw Lurch and TJDave. We left there and headed down to another tight trail that Ed knew of. It turned out to be an awsome run with everything thrown into it. Somewhere along the run I snagged a tree and blew my right rear tire. Luckly I was just about to a flat spot so I pulled up there and hailed Ed on the 'ole CB and he turned around. I found out that I needed a high lift, thanks Ed, and why one should carry a spare! After changing the tire we headed on down the trail and were back in camp within an hour or so.

Lee did however leave out one story worth telling. As I'm waiting at the Pilot station for him I give him a call. He said he's coming down the hill into E'burg and had to stop to check out something on his trailer. When he gets to the station he tells me that someone held up a sign as they were passing him and told him to check his trailer. So, like a good Putter, Lee pulls over. Upon inspection of his trailer he find out that the trailer hitch was just sitting on top of the ball. The only thing that kept the trailer hitched was the weight of the wood in front of his trailer. I couldn't believe he made it as far as he did.

I've included a few pictures that I took...enjoy 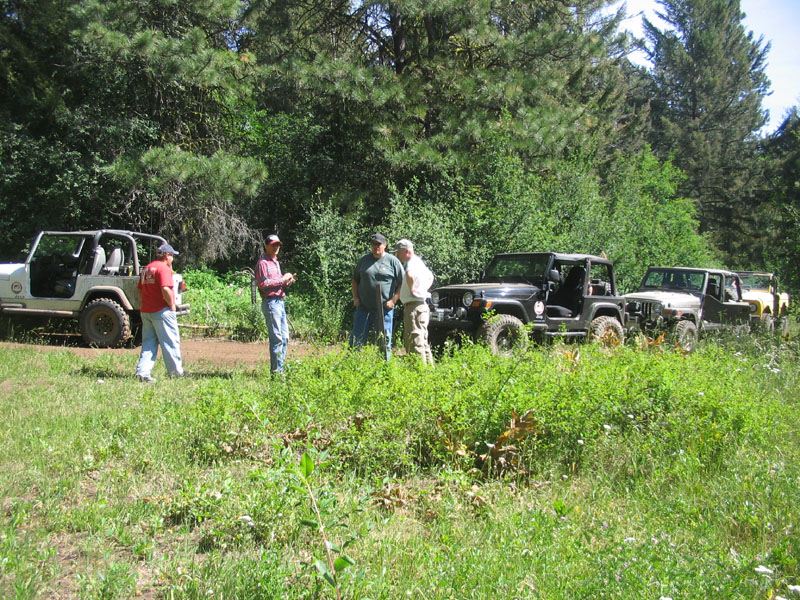 Here's Lurch showing us how to do an off camber turn....and it worked too! 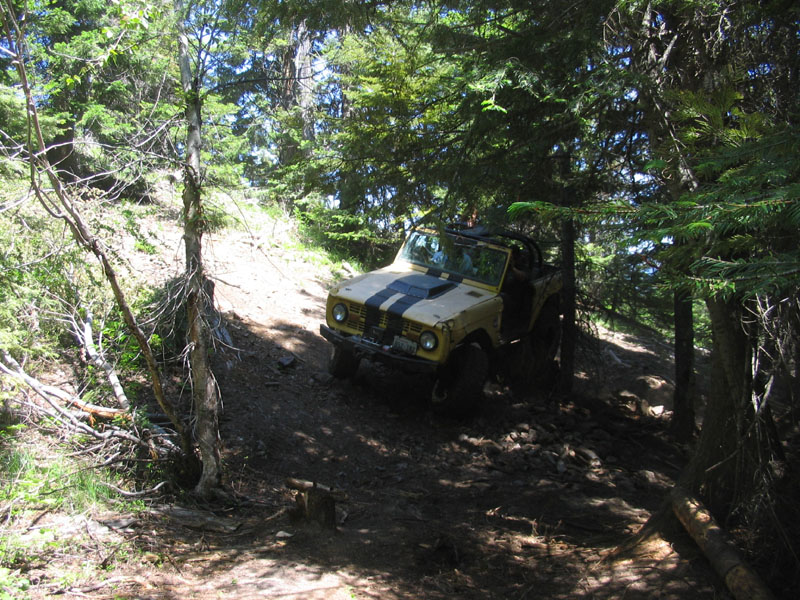 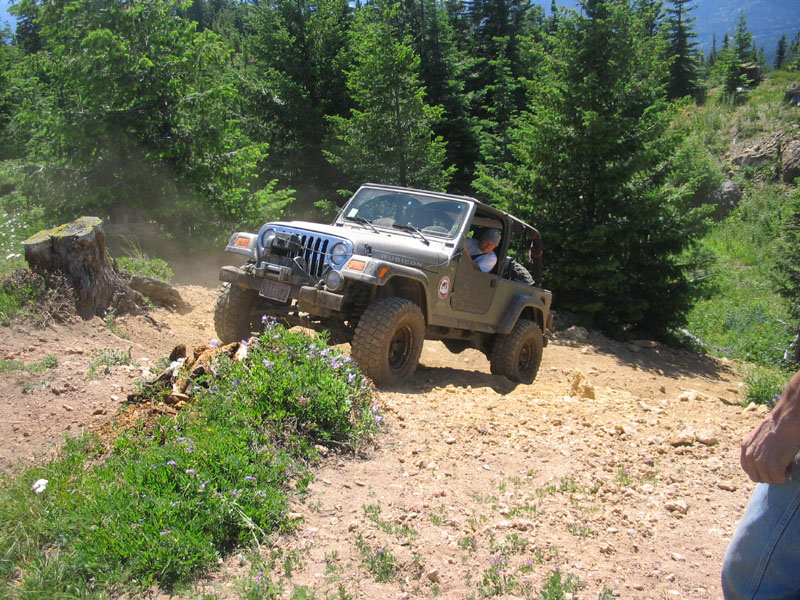 Lunch on top of the world 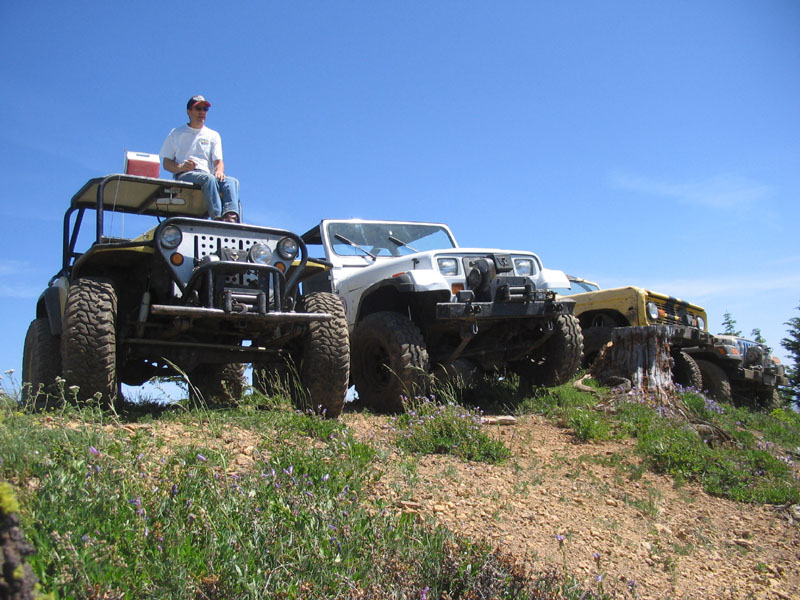 View from on top of the world 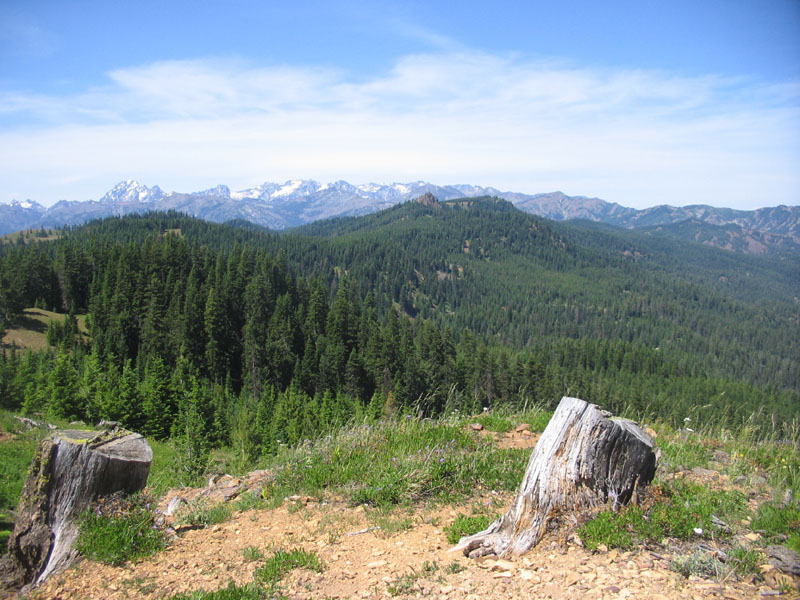 No camping trip should be without it 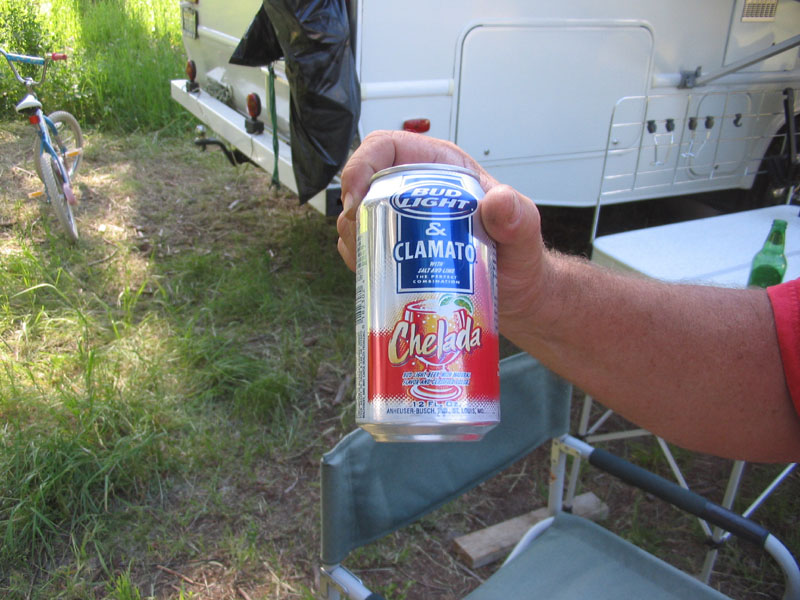 Bet you can't guess what this is all about 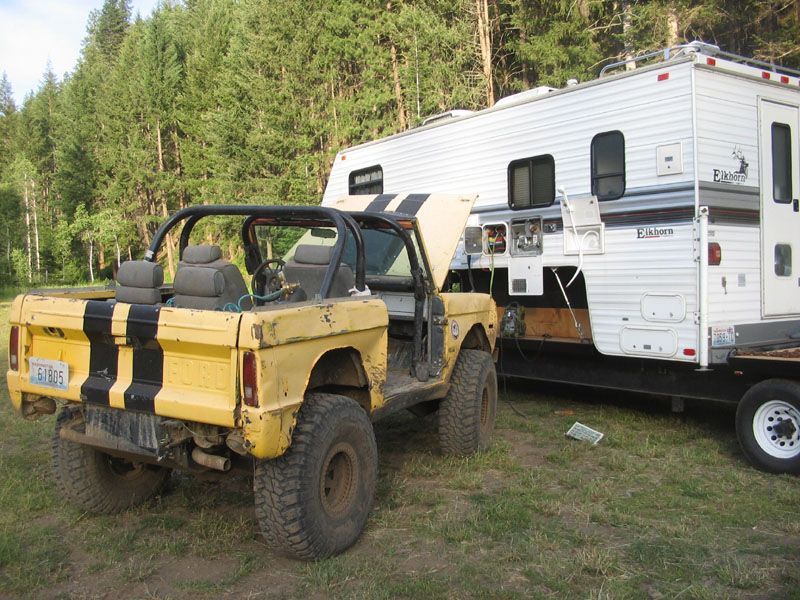 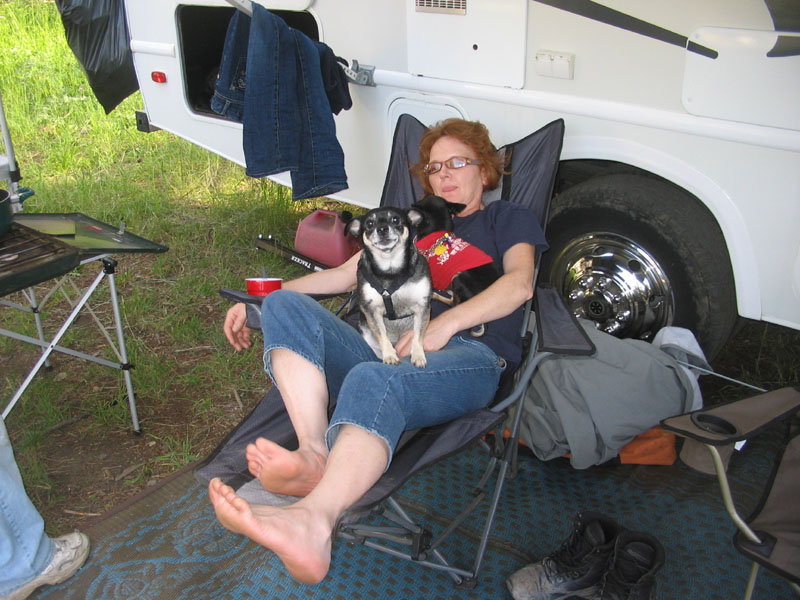 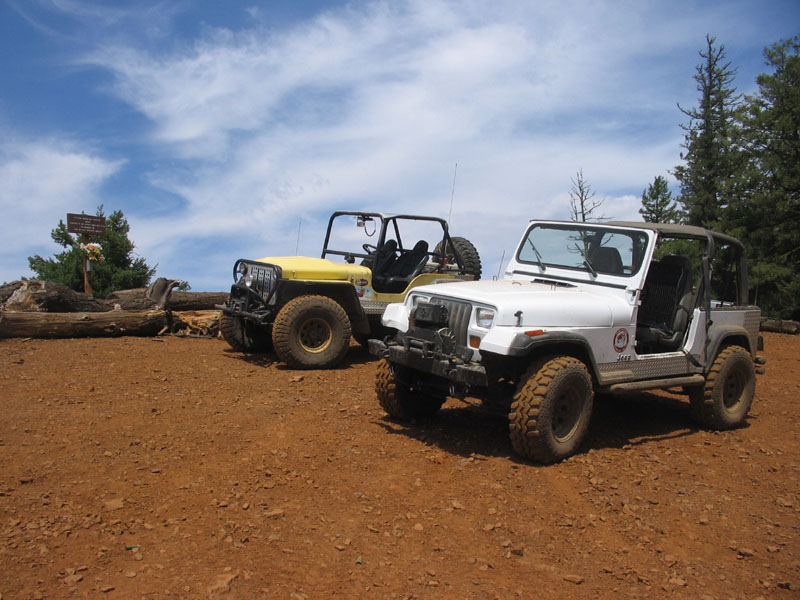