Here is the first stab at the Peak Putter's July 4th Liberty Run and Campout...

This official run was called by Tim. Many of us showed up to the William's Creek camp area on Friday with a few crawling in on Saturday. The weather was prefect for the whole weekend. Itch bugs were few and the other campers were well behaved. Kudos to the BLM folks that presure washed and restocked the restroom each morning.

On Saturday, Tim, Ed, Chris, Rob, Steve W and Steve R along with their passengers ran trails West of Highway 97. Here are a few shots on the trail. We were moving fast so there was not much time to snap photos. It started out with easy trails to shake down our rigs. We finished the day with a few really steep and tight trails (I don't know the trail numbers). 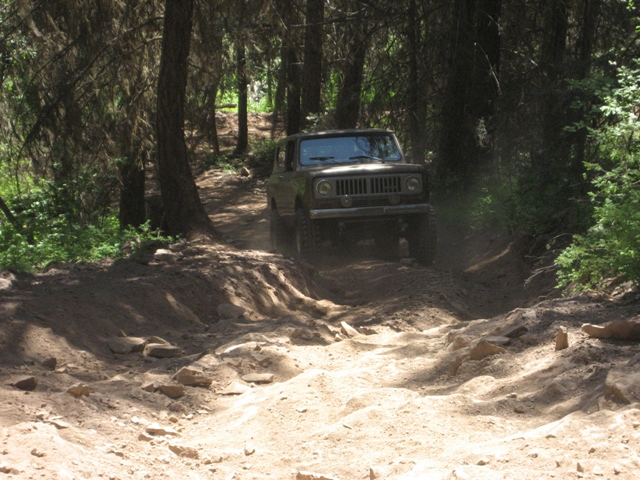 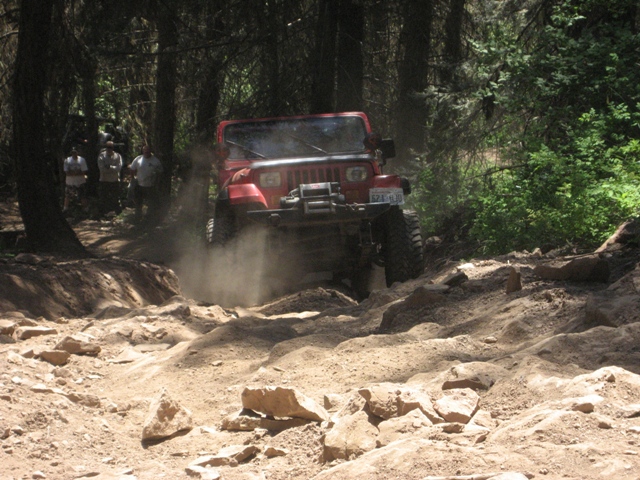 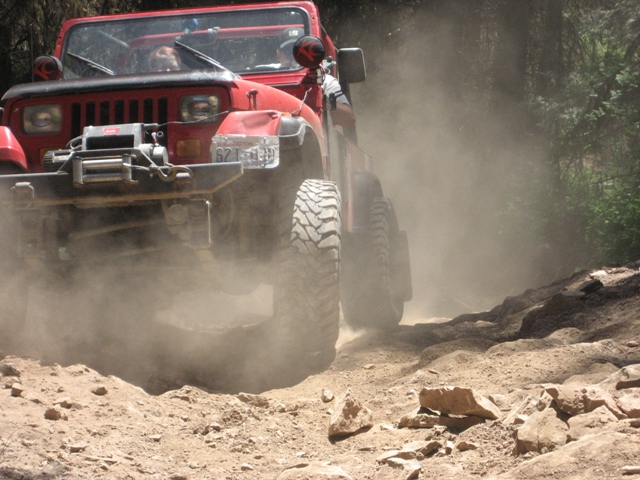 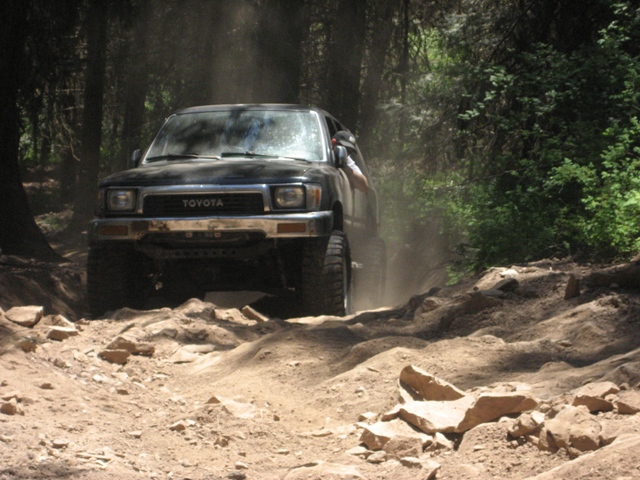 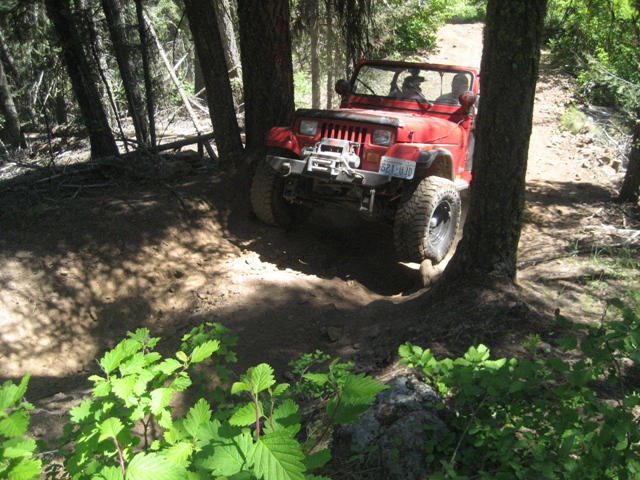 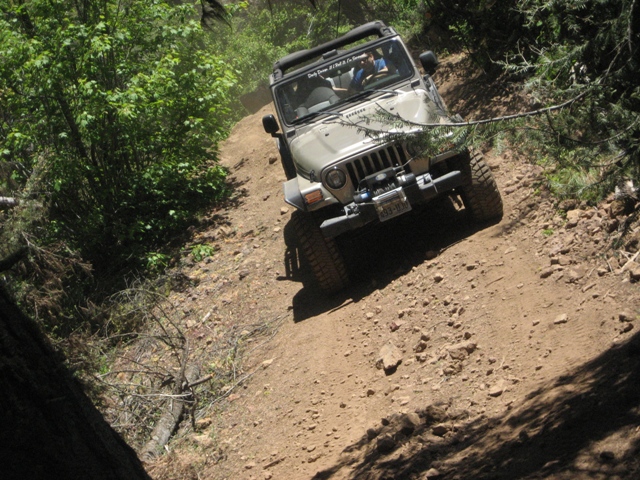 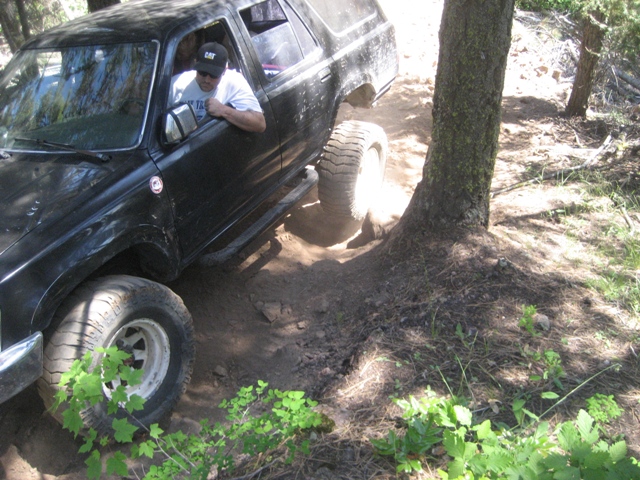 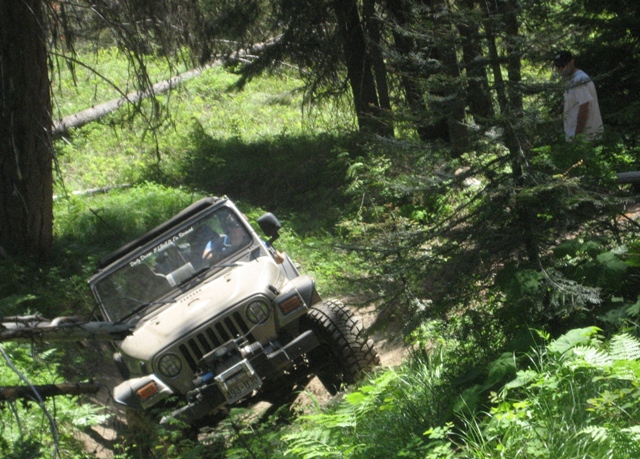 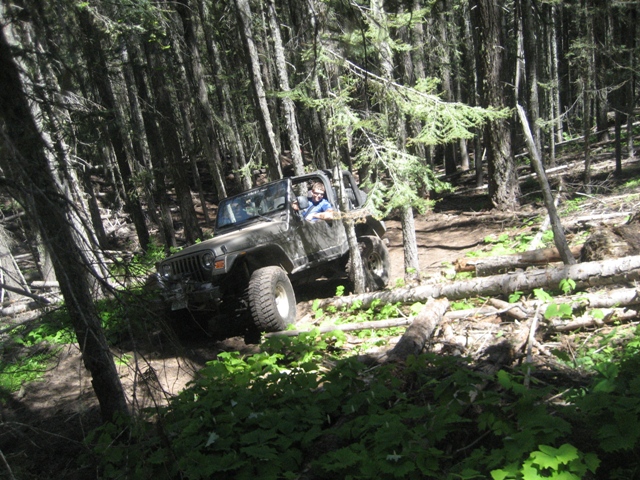 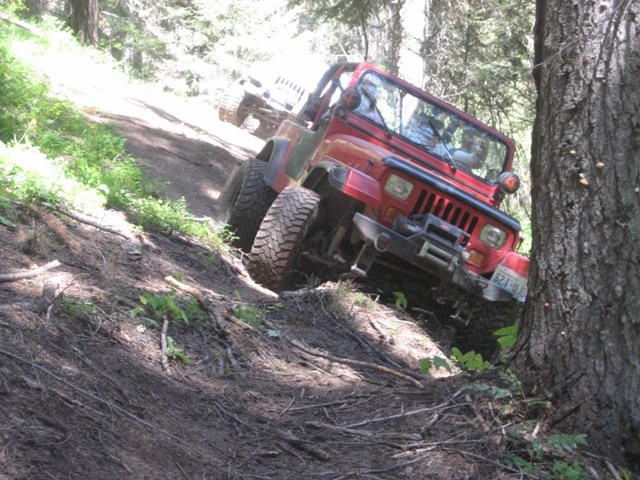 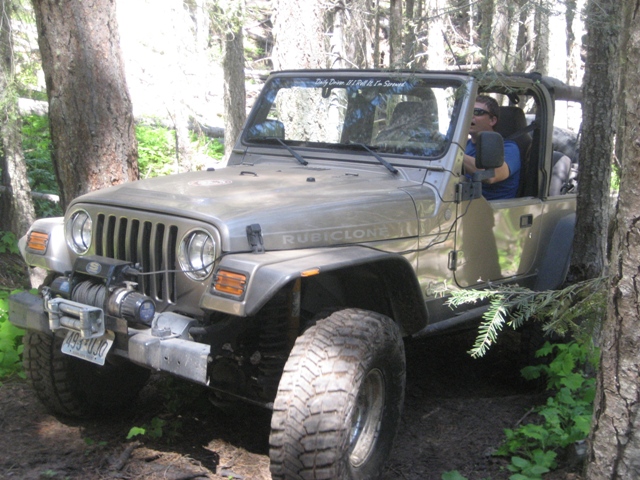 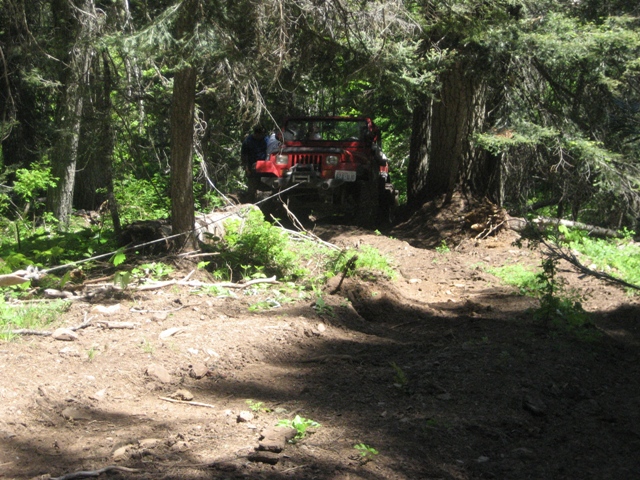 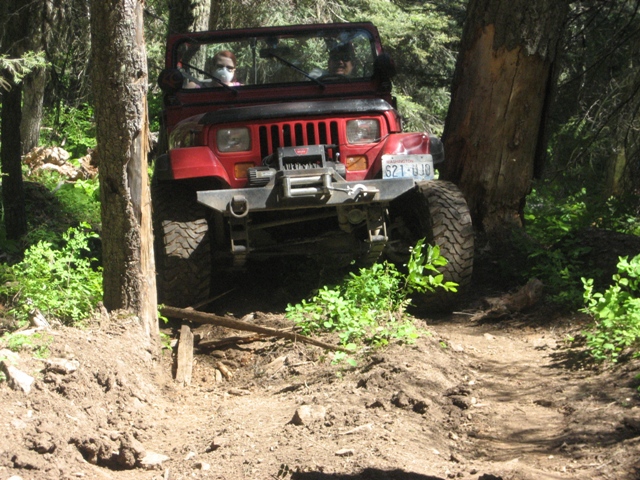 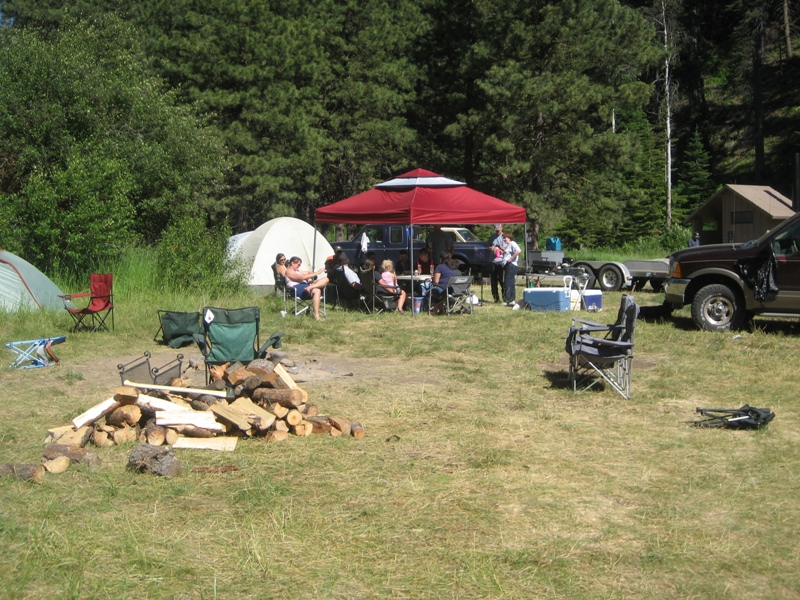 The group grabbed a table and a chunk of shade for cocktails and dice game Sunday afternoon.

On Sunday, Ed, Chris and Steve along with their passengers ran trails on the East of Highway 97. No camera on this trip

Again, we started out easy and worked our way up to a couple of short gnarly trails. The 315 and 317 trails were snowed in enough to make traveling too difficult for part of our party so we skipped them. The main road from Lion Head to Haney Meadows had a batch of large snow drifts that provided good times as we dropped down the ridge to lower trails.

Jose, Lee, and Steve W ran some lower trails on Sunday. They ended up on road over Lion's Head. We could hear them on the CB playing in the snow drifts.

Monday morning exposed us to the dreaded â€œman quicheâ€
I don't Text (at least not very well), I eat Blackberrys, and I only Twitter after sex...
Top

We had a really good time!! Of course, we always do.

In camp while the rest were on the trails, Karen introduced us to some kind of a coffee/booze smoothy (yikes it was goooood) and Dolly taught us a new dice game. Kids alternated between hanging out with the "adults" and playing in the creek and on the mountainside. . .

As much fun as we had in camp, I think that maybe I'll be wheelin' next time. . .

Again, we started out easy and worked our way up to a couple of short gnarly trails

Ed must have been leading
James
'92 YJ with a little something of everything.
Top

Enjoyed the evening despite what mother nature was inflicting on me!! If I seemed grouchy, I do apologize

Dave
Have Scout, will wheel...Someday...Maybe


Quote:
Originally Posted by Oregon80
-By driving a Scout, you my friend have recycled, which is more than those pansy Prius owners can say.
-I love driving a piece of history that was nearly lost.
Top

We had a amazing time camping wheeling with everyone. The kids really good too.
HE TOOK THE BYPASS?? YEAH ITS A JEEP THING.
Top

OldGreen wrote:We had a really good time!! Of course, we always do.

Well, my Liberty run went differently than planned, but I am happy to report ended well, with a little help from my friends. Much of my week leading up to the run was spent watching JosÃ© weld my bumper. I was there to help, but mostly my job was watching. Thursday night found us admiring his handy work over a beer or two at 2:00 AM. Friday afternoon I arranged to get over and pick up my Jeep trying to get out of town to Liberty in daylight. The trailer was already loaded with firewood and gear and I just had to hook up the Jeep and throw a cooler in the back. I headed out later than I wanted, but hoped to be setting my tent up in daylightâ€¦ barely. That was not to be. 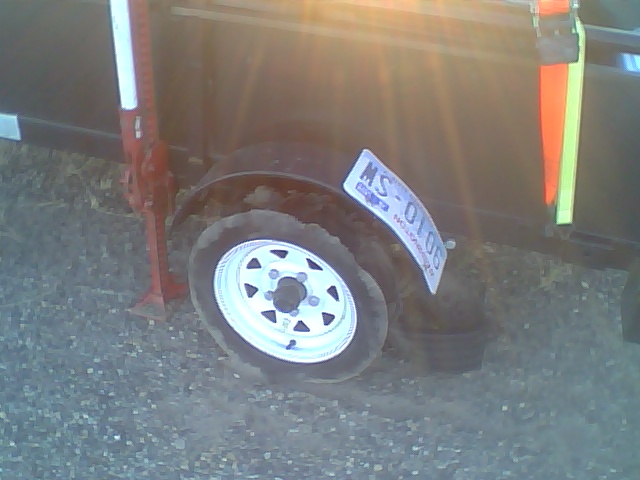 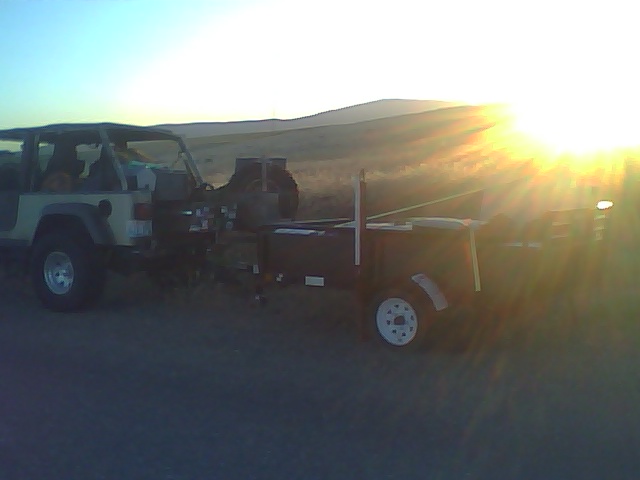 The wuppity, wupppity, wup behind me reported bad things a happening round about Horn Rapids ORV. That noise also told me I should have bought that spare that I have been eye balling on the inter-web. A couple phone calls later and JosÃ© remembered that lost somewhere in Grumpyâ€™s backyard was a trailer whose tires might just help. A call to Dave put him into actionâ€¦ he only had to fight two skunks to win back his trailer, before removing and airing up the tires to bring them to my rescue.
It was a beautiful night and I did not have to wait long before Dave showed up with the tiresâ€¦ My hero.
Well I turned my Jeep and trailer around and headed back home. Saturday found me on the hunt for lug bolts (thatâ€™s not important) and also found me in the market for trailer tires. More money later than my wife likes to count the Jeep and trailer were ready for Liberty and this time I left with my wife and kids in tow following me in her Subaru.
We were welcomed into camp by a goodly crew where excellent tenting space was reserved for us. Some were planning on pulling out In the AM, some were planning on following Ed (always a good idea even if it breaks my own rule), and some were planning on family friendly wheeling. In the morning I tried to lead Steveâ€™s Scout and JosÃ©â€™s YJ on a quick fun run, but took a wrong turn and found a meth lab. Well, it was too early in the morning for meth, so Steve decided to air up and head out. Afterwards the Ybarra clan and the Retterer clan set out for fun and the Hole in the Rock trail. Fun, we foundâ€¦ the Hole in the Rock Trail still eludes us.

Our travels eventually took us to Tronson Ridge Trail / Upper Naneum (4W312). It is an easy trail with spectacular views. A mile or so into it we came to a large snowdrift that seemed to be hiding a 90 degree left turn under it. Before I could explain that there was more digging than we should be interested in, Sveta was moving snow.

Soon JosÃ© and I had the shovels and the Jeeper Chicks of all ages were playing in the snow and posing for pics on a drift on the Fourth of July.

We had to use JosÃ©â€™s winch as his steering wheel, but he made it over the drift with little drama.

â€¦ a little more digging to accommodate my wheelbase and I was able to tackle the drift with a little â€œWee!â€
Okay, we're a little crazy to have a Duramax for a daily driver. But if we go off our meds, we might wind up in a Prius.
If you want to hear God laugh, tell Him your plans.
N7EEL WROD249

Well, that took some work.

Okay, we're a little crazy to have a Duramax for a daily driver. But if we go off our meds, we might wind up in a Prius.
If you want to hear God laugh, tell Him your plans.
N7EEL WROD249

I don't Text (at least not very well), I eat Blackberrys, and I only Twitter after sex...
Top

It's just that rich Liberty dirt made it grow while I was washing the Jeep.

Okay, we're a little crazy to have a Duramax for a daily driver. But if we go off our meds, we might wind up in a Prius.
If you want to hear God laugh, tell Him your plans.
N7EEL WROD249

Now that you're all practiced up washing jeeps, come over and do mine, would ya.